Use our RSS Feed to keep up with the latest news and events from the SVA BFA Film & Animation program.
July 24
2017 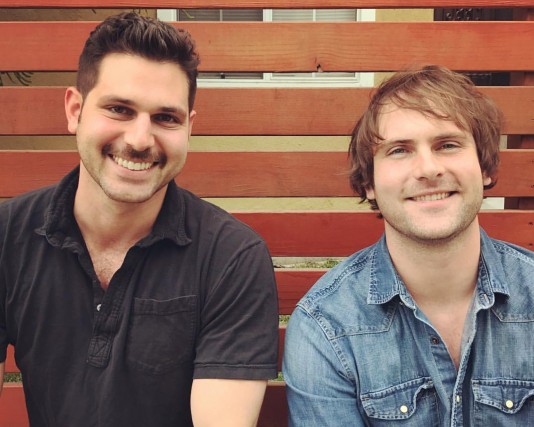 Nick Chawkin (BFA Directing ’09) proves that determination and creative thinking are the most crucial assets to independent filmmaking.

After graduating from SVA in ’09, I moved to LA. I spent the next year working on my first few feature scripts. After I finished a draft, I would send it to my good friend and fellow SVA alum David Guglielmo. I knew David and I had similar goals. He was writing features too, and his notes were always good. So we traded scripts, and gave each other feedback in an effort to get closer to our ultimate goal: direct a feature film.

​Eventually David made the move to LA and crashed with me and my then girlfriend (now wife) Katie. We were happy to have him. He was an old friend and a good house guest, but most importantly, our pets were fond of him. We were both in between writing projects, and somehow decided to try to write something together. Two weeks later we had a first draft. Working together was much more natural than we expected it to be. Shortly after that David found his own apartment and moved out, but we kept our same workflow. We would meet up six, sometimes seven days a week and put in time writing. That year we wrote something like three or four features together. We pushed each other, literally sitting on the same couch and passing the laptop back and forth. If one of us wasn’t feeling inspired, the other would step up and hammer out some pages.

In 2013 we​ met a young guy who came from money and wanted to invest in an indie film, so we pitched the new script we had just finished. It was one that we had written simply for our own enjoyment. A noir called No Way to Live – set in the 1950’s and disguised as a romantic thriller with racial tensions and twists on every page. The investor read and immediately signed on board.

All of 2013 was spent getting ready to shoot. We hired a casting director. We hired actors. We were doing it!

…until we weren’t. Just 6​ weeks out from production our investor got cold feet. A familiar story in this industry, but until it happens to you, you don’t know how much it stings. It felt like a break up, and we treated it that way for a while. We were heartbroken to get so close and have it just fall apart. But then we got a loving slap on the back of our heads from Katie, who said something akin to “Quit your bitching and go make your movie.”

At first the notion seemed impossible. After the investor dropped out we were left with only a few thousand dollars that we had raised ourselves. Not enough to make even an ultra-low budget indie, let alone one set in the 1950’s south. But the more we thought about it, the more it seemed crazy enough that it just might work. We had more money raised than we ever did in the past for our short films. We just needed to switch back to that same mindset that we had then. Do whatever it takes to make it happen. How can we do this on a micro budget?

The first step was to shift gears, and reimagine what the shoot would be. We wouldn’t be shooting in the actual south; we would need to find locations here in LA that didn’t give away where we were. We wouldn’t be able to do extensive night shoots and car rigs; we would have to rethink all that. We met with the actors we had cast and we told them our idea: We had enough money to shoot for about a week at one location. From there we would raise more money and shoot some more.

Miraculously the actors agreed to come on this adventure with us. The two leads, Freya Tingley and Tom Williamson both had such strong reactions to the script that they were game to do anything to help make the movie happen.

October 2014 we started production on No Way to Live. We shot for seven days at a house tucked away in the hills of Topanga canyon. Katie agreed to sign on as our executive producer and we hired fellow SVA alum Alex Chinnici to be our DP. With the three of us putting our heads together we successfully made all our days, and shot what would go on to be the whole beginning and end of the film.

After shoot one wrapped, we cut together a few scenes and a teaser trailer, and then Katie, David, and I set out to raise the money for shoot two. One month later, November 2014, we were ready to shoot again, and we had a plan. We scheduled a long weekend in a studio to knock out a series of nighttime car scenes.

The studio shoot went surprisingly well, mostly due to Alex stepping up and leading his crew through some extremely challenging lighting set ups, including lights on dollies moving back and forth, rain and motion effects on the picture car, passing street signs, etc. All done in a little studio in Burbank. After that shoot we incorporated those scenes into our teaser and, you guessed it, went back to fundraising.

The third shoot we had planned was to be our biggest and most expensive yet, taking on all kinds of different locations and set pieces. Parking lots full of period cars, extras, action scenes, stunts, more rain, thunder and lightning, a car crash. All a producer’s nightmare for an ultra-ultra-low budget. But the good news was that it would be our last shoot. By March of 2015 we were finally ready to go. The shoot was only ten days long, but it tested us every step of the way. We had to sweet talk ourselves out of trouble with police. We had crucial crew members get violently ill, we had an on-set injury. Trust me when I say, we went through the ringer. But by the end of the year we had a finished film. One that we are insanely proud of and one that we can call our own.

If you are a filmmaker about to set off on the journey of making your first feature, I’m not going to encourage you to do things the way that we did. Shooting in sections is NOT ideal. We could have easily lost one of our actors to a big TV show at any time and been screwed. We knew that, and it was just one of the many risks we took.

What we did right is this: We took things into our own hands. To get a project going you need to have agency. Especially these days, where money for independent movies is so hard to find. Don’t wait for your dream budget to fall into your lap, because it never will. Shoot with what you have.  When a producer breaks down your script and gives you a number and says “This is what you need”, just know that it’s not the case. Trust me. Movies go through multiple budgets. Things change, so don’t waste years of your life waiting to hit an arbitrary number just because a line producer told you that it’s the magic number.

Our ultra-low budget ended up being the thing that allowed us the most freedom. It’s been said before, but I really think that creativity thrives under limitations. We were forced to get down and dirty so we embraced it. On this movie, we were dumpster divers. We were problem solvers. It’s a choice to see it as a blessing. When you’re small you can fly under the radar. You’re not answering to studio executives; you can get freaky. So own it, and find a way to make the movie of your dreams, whichever way that you can.

No Way to Live is available to rent or buy today on iTunes, Amazon, Youtube, Verizon fiOS, direct TV and more.