Use our RSS Feed to keep up with the latest news and events from the SVA BFA Film & Animation program.
August 3
2018 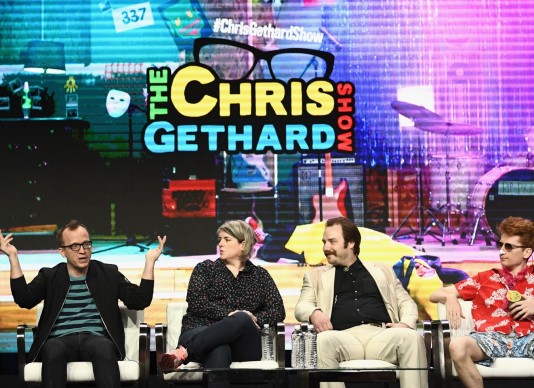 Devin James Araujo (BFA Film 2018)  interned on The Chris Gethard Show in  Fall of 2017.  Here, he shares his awesome experience working on the show.

Whenever someone asks me where my favorite place I’ve worked is,  I always say  “The Chris Gethard Show.” The response is always the same: “What’s that?” I then go on to explain the show for ten minutes because it was the best show on television. I had the pleasure of interning on TCGS the first semester of my senior year at SVA. When I got the job, I had to ask myself “Is this possible? Am I going to have enough time to do this?” I definitely made the right decision. On my first day, I met so many people that it was hard to remember names. I knew that this semester was going to be one for the books. I almost forgot to tell you what The Chris Gethard Show is! TCGS is a live show with a studio audience, special celebrity guests, insane segments, on-air calls, surprises, fun, and the Human Fish. The host, Chris Gethard, has a theme for each episode. One week he asks “What’s your dream?” Another week he asks “Is technology taking over the world?” Anyway, back to me. Some days I ran around the city to go pick up a shovel and other days I madly called prop shops to see if they had a certain vintage table set. This show made me fall in love with live television. Before TCGS I always thought that live TV had to be perfect and no one could mess up. After working on the Gethard show I realized that the best part of live TV is the fun of not knowing what’s going to happen! Shows went live Thursday nights at eleven. I remember the first show I worked on like it was yesterday. An hour before the show Marc, the Australian art director, wrangled me into the back room and made me cut and nail wood together. We pulled it off with four minutes to spare. What a rush. My favorite episode to work on was one where we had to assemble an obstacle course made of things solely found on Craigslist or the trash. The interns, producers, and production assistants set up a week before the show went live. I was in charge of the dirt. The next day we bagged all of the dirt and brought it to a garden. It was hard work but it paid off. The show went great. I loved how everyone helped with the obstacle course. That’s why The Chris Gethard Show is so different from the rest of the shows out there. On other sets and television shows, everyone has their one job and that’s all they do. They’d see a person needing help carrying something and turn away because it’s not their job. The staff at TCGS are all in. The producers help the interns lay down tires. The writers help run the rehearsal hours before the show. The execs test out segments themselves. It was a beautiful thing. Even though I wasn’t paid, TCGS was the best experience I could have ever asked for. I learned that it really does take a village to make something beautiful. Being able to spend those long nights with such cool people made it all worth it. After the show, which ended at midnight, the whole staff would go back to the office and have a pow-wow with pizza and drinks. I would usually walk home at around one o’clock in the morning. Every time I’d listen to the sounds of the city down Madison Avenue thinking about the day and say to myself, “This is the best job ever.”