Use our RSS Feed to keep up with the latest news and events from the SVA BFA Film & Animation program.
March 17
2017 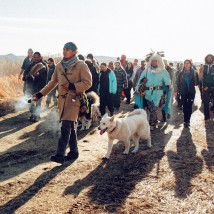 The Social Documentary department is presenting a program of activist films from the modern era of protest. You can see some of the work the SVA community has made surrounding the last few months of protest: Standing Rock, Women’s March, Yemeni Bodega Strike, Funeral for the Presidency, and the general tenor of resistance.

Rose Vincelli Gustine, SVA’s SocDoc (MFA) Director of Operations, speaks to us about the upcoming screenings.

Talk of resistance and protest has ignited in a new way in recent months, and in my role as an advocate and advisor for filmmakers, I have felt the need to create a platform for our student’s voices to be heard. Over coffee one morning, my fellow SocDoc faculty Deborah Dickson, Micah Fink and I decided we had to take this opportunity to activate our department. Not to require action – but to inspire it.

We are a “social” documentary program after all and this is the time to be an active participant in our politics.  With one click of an email gauging interest in creating short stories of protest, the students were off and running.

I feel very excited to have the opportunity to stoke the activist hearts of our students and to inspire them to find their way to protest.  By building upon our already tight filmmaking community, we can be heard and we will be heard, starting with our first ever protest film series— Resist and Record: Activist Films from the Modern Era of Protest.  Join us Monday, March 20th in the SocDoc Theater from 6pm to 9pm and join the conversation!  Be sure to RSVP as seating is limited. Hope to see you there!

“Best of Luck with the Wall” (2016)
By Josh Begley; Run time: 7 minutes
A voyage across the US-Mexico border, stitched together from 200,000 satellite images. (Courtesy of Field of Vision)

“See Me Protest, Hear Me Roar” (2017)
By Lifei Diao; Run time: 5 minutes
Combining footage from two important NYC-based protests, the Women’s March in January and the General Strike Protest in February, this film profiles the different characters who have come together to oppose the recent Executive Actions of Donald Trump. (SVA MFA Social Documentary)

“Women’s March, NYC” (2017)
By Atarah Jeffers; Run time: 3 minutes
This short film covers the enthusiasm and diversity showcased in the faces of those who attended the historic Women’s March of 2017. (SVA MFA Social Documentary)

“Concerned Student 1950” (2016)
A Film by Adam Dietrich, Varun Bajaj and Kellan Marvin; Run time: 32 minutes
A series of racist acts prompts three University of Missouri students to pick up cameras and take us inside Concerned Student 1950, the student movement whose peaceful protest brought down the college president. (Courtesy of Field of Vision)