Use our RSS Feed to keep up with the latest news and events from the SVA BFA Film & Animation program.
October 2
2017 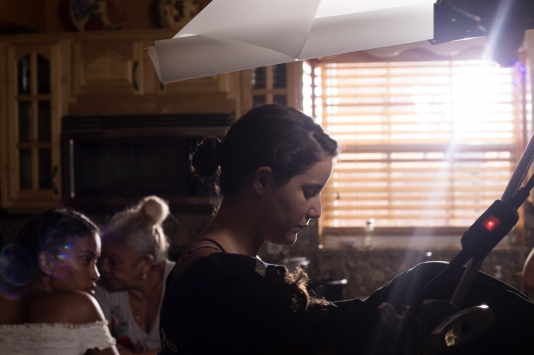 Thesis student Isabel Montes is an editing major, but that didn’t stop her from writing, directing, and (of course) editing a film of her own.

A little less than a year ago I was sitting across the table from my boyfriend, telling him about how I had the option of making my own film or editing someone else’s. I told him I would just edit my fingers off all of next year, but I looked up to see him staring at me as if I was speaking gibberish. He said, “What are you talking about? You’ve got to make a film.” We argued a bit; I told him he didn’t know what he was talking about and I did. I went home ready to unload the whole conversation to my sister thinking she would agree with me, but to my surprise she said, “well… he’s right.” The following day that I reluctantly started writing the script for Cuando Te Vas. I had little to no idea what I wanted to say but I knew that I had something, and that this might be my only chance to make something that’s purely mine. I put a lot of pressure on myself to make sure I was using this opportunity to say something important.

Then, one cold December day after I spending two months with mere sentences on a page, my mom called me. She told me that my grandfather’s Alzheimer’s caused him to have a stroke. He was physically fine, but he had forgotten how to speak. That news hit me like a ton of bricks. I had so many questions I wanted to ask him and so many things I wanted to talk to him about but I couldn’t anymore. My script had always been about my grandparents, I just didn’t know it until that day. I finished the fifth and final draft of my script in March, but then a whole new set of responsibilities popped up. I am good at writing and I am good at editing but I had no idea what to do in between. I spent, arguably, my last summer vacation pulling my hair out with a terrible case of imposter syndrome, but I managed to raise seven thousand dollars, fly my cast and crew to Miami, and direct a real film for the first time in my life.

At the beginning of August, after I had finished successfully purchasing equipment insurance and actually understanding what all the terms meant, I called my sister. I told her how incredibly happy and excited I was, and confessed that I had spent the past six months unconvinced that I could actually pull this production off. I told her that my big dirty secret is that I live my life faking this so-called confidence I have about my work. I always act like I know how to do something but am terrified that someone will find out that I don’t actually know what the hell I’m doing. My sister said to me, “Well if that is the case, then you’ve got everyone fooled because you sure as hell know what you’re doing now.” I’ll never forget that conversation. So it came time for the shoot, and I was shaking in my boots. I had no idea how to be a good director. Luckily, I had an extremely patient and understanding crew to help me out along the way. Day 1 of shooting was a success; we finished on time and everyone felt good in spite of going to sleep at 3am. Day 2 was incredible; we finished EARLY and celebrated by jumping in the pool afterwards. Day 3 was a complete and total disaster. The beginning of the day started fine, we broke a few moral laws shooting in a cemetery on a Sunday but overall it worked out. When we got to the beach location it was PACKED with people, despite how early we got there. I took a gigantic risk by telling everyone to get back in their cars and go to a different beach that my best friend’s boyfriend suggested. When we got there, it was paradise. It was exactly like what I pictured in my head. I thought the drama was over until three police officers came over at about 6:15pm, right before we could film our last scene, and told us that the beach that normally never closes will be closing at 6:30pm. I felt my heart sink down into my stomach. I was out of money and out of time. In a last-ditch  attempt, we packed up and got in our cars again to a different beach. When we got there we were told that one was closing too. I had a moment of complete clarity and decided to call it a day. We had done all we could and we would figure out how to shoot the missing scene in New York. I think I made the responsible decision to not force something that wasn’t working and sacrifice the quality of my film. Overall, I’m proud of the work we did that week and all the work I did the last six months, but I couldn’t help but feel weird after the shoot. I told my mom that I had this strange depression after the shoot because everything I had stressed about was over and I didn’t know what to do. I also hated that I didn’t particularly enjoy myself on my shoot. I got back to New York and I had this feeling for a while until my sister, again with the same sage advice as before, told me that my feelings were only natural because I’m not a director and there’s a reason I’m an editor. That made me feel infinitely better.

Now I sit in front of my computer with the footage from that week laid out in front of me all I can think is, “let the fun begin.”