Use our RSS Feed to keep up with the latest news and events from the SVA BFA Film & Animation program.
February 23
2018 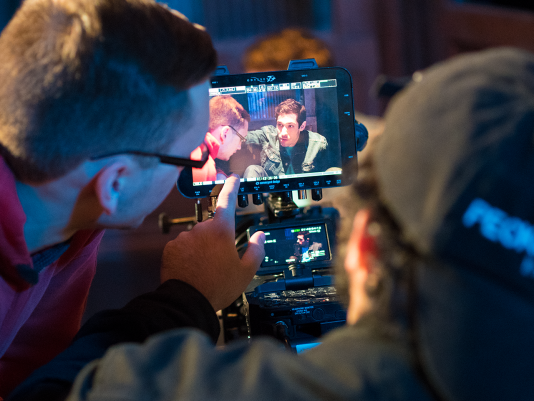 When I first started making videos in 2006, I was a 9-year-old kid with an overactive imagination, a weird sense of humor, and a love for the fantastical and unknown. YouTube was just beginning to come about, Windows Movie Maker was the video editing software of choice, and at that time, my ideas were greater than my skills. One of my ideas I toyed around with was bringing the little cartoon person I drew on the backs of my notebooks and folders to life on the screen. His name was Mininicky, but after years of refining his design and developing his personality, I realized he needed his own name, so he became Bubby. By the end of my time in high school, I had created another character, Tracy. With these two characters developed, I turned to my inspiration, Who Framed Roger Rabbit, for ideas on the story and the world I sought to create. I realized there were a lot of questions the film didn’t touch upon with its “toons-in-real-life” concept. Questions like “How are toons created?”, “What are the physical limits of toons compared to humans?”, and “What if a human and cartoon character fall in love?” are a few of many I kept in mind while crafting a world for my characters. I want to explore themes of creativity, growing up, and finding happiness, as well as more mature themes like love, identity, rejecting societal norms, overcoming differences, and even existentialism. I soon realized that I had to develop this into a series, so I began work on this project, now called Inbetween. There’s a notion that cartoons are “childish” or “for kids”. I’d like to challenge and subvert those notions with Inbetween. I feel that my characters’ “cartoon-y” appearances will contrast nicely with their complex thoughts and feelings, leading to interesting scenarios and character development. Giving depth to these two-dimensional characters is key taking them seriously. I’ve started an Indiegogo campaign to raise money for the film because I don’t have all of the funds to pay for the film myself. I’d like to begin production in summer 2018 and get finished in time for its premiere at the Dusty Film Festival in 2019 while still having a level of quality as good, if not better than, the film I was inspired by. Please help me realize my childhood dreams on Indiegogo: https://igg.me/at/inbetweenfilm

Ideally, I would like to organize an animation crew to help me animate in my thesis year. If there is anyone who would like to do character animation, cleanup, inbetweening, VFX work, sound design, composing, or any other help with with my project, please let me know! I can be reached through my email at nmudryy@sva.edu or through Facebook as Nicky Mudryy.

Lastly, if you’d like to watch my previous semester project, the second teaser trailer for Inbetween, please click the link here to watch it on my YouTube channel moodryy: https://www.youtube.com/watch?v=1x_Ks2zptkI

Massive thanks to BFA Film students Vito Di Maio, Noah Torres, Tim Mojica, Tate Hoffmaster, Corey Perlin, Carol Yan Li, Santiago Guerrero, Eric Althen, Joe Atamaniuk, Takeru Thinley, and Tal Drori for the production of the second Inbetween teaser trailer. Special thanks also to BFA Animation students Ziyi Wang, Whiskey Wu, Andi Nguyen, and Joanthony Jiminez for their contributions to the teaser trailer. Lastly, I’d like to thank George LaVoo, Brad Rodriguez, and the Film & Animation Collaboration Workspace class for giving me valuable guidance while I was making the trailer. Fostering collaborations between the different majors is something I’m all for and can only expand the creative potential of projects, no matter the medium. I was grateful to have that kind of opportunity with the class and hope that more students consider making collaborative projects in the future.