Use our RSS Feed to keep up with the latest news and events from the SVA BFA Film & Animation program.
December 6
2013 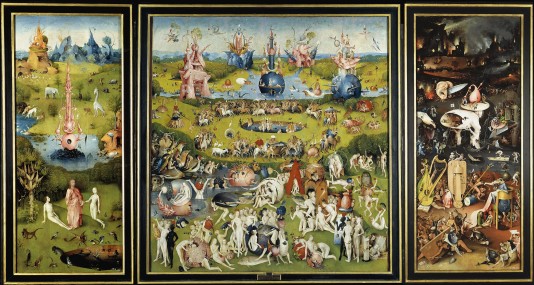 The history of the voice in The Exorcist is complicated.  As soon as I agreed to do the sound for that film, (Director) Billy Friedkin asked me to help him make the voice. It’s a very difficult area because in sound – unlike in visual imagery – there is no common language to express different qualities.

We felt there should be not one voice – but a chorus of voices. Billy actually brought out a book with a photo of Hieronymus Bosch’s triptych, The Garden of Earthly Delights (pictured above), and said: I want it to sound like this.

We went through many, many versions – what we came down to is that the voice should sound like EVIL.  But what is that – what does that sound like? One day, when we had run out of energy and ideas, Billy Friedkin came down to the stage where we were recording and moaned and groaned from the depths of his being into a mic for 15 minutes.  I swear I heard his soul.  I slowed it down and we used it to motivate the actors, and as an example for post. Linda Blair’s voice was added, and Mercedes McCambridge’s voice is heard for about one minute. We even used animal sounds, like the roaring of beasts – but the template was Billy’s own voice.

From a psychological standpoint, there are 6-8 very specific sounds which provoke the fight-or-flight response in the human nervous system. Ultra low frequencies, dogs barking, wind howling – things like that. Billy did not know this or know what those sound were – but he instinctively used most of them in the first third of the movie. We don’t see the Devil until an hour into the film but the build up is so suspenseful, you’re terrified!

Check out his Faculty page here!