Use our RSS Feed to keep up with the latest news and events from the SVA BFA Film & Animation program.
December 9
2016 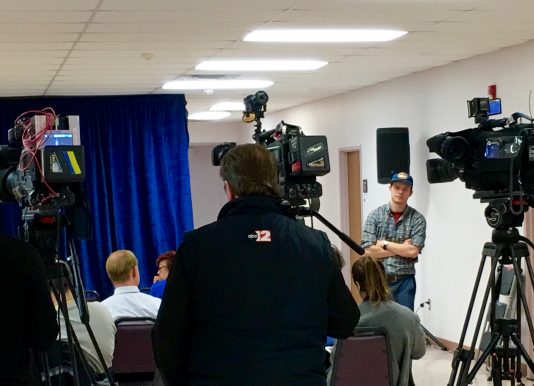 Will Hart (BFA Cinematography, 2014) has been following the water crisis in Flint, Michigan, since the beginning, working on a documentary. Produced by Writer/Director Paul Haggis, it will be will be premiering in festivals next year. Here, Will talks about his massive undertaking, tracking the roots of a tragic—and preventable — problem all across America. This is part one.

A couple months ago, I showed my friend Rob footage from the documentary on Haiti we shot in 2014. He’s a TED fellow now, and an emergency room doctor at Kings County. I talk with him about growing up in Brooklyn, civil unrest, and injustice, as we watch dailies from my first trip to Haiti two years ago – my first big documentary project.
We always help each other and give feedback on the other’s work. I showed him pieces of the Flint Documentary and he showed me what he was working on. We spoke about this feeling you get when you make documentaries – a drive to keep producing the work and seeking the truth.

Not long ago, a FOIA (Freedom of Information Act) release of emails between the Michigan Department of Environmental Quality, EPA and the State of Michigan dropped online. I stayed up very late, scrolling through redacted pages building a timeline, getting confused, starting over. I was driven mostly by anger. When something gets under my skin (like the documentary in Haiti and now Flint) it is a really bizarre feeling in my stomach. Angry determination.

We’ve now done over 60 interviews — and probably have enough to make something that could be like Ava DuVernay’s 13th, which is s great documentary, packed with information (now on Netflix). It covers everything. You blink; it’s over. Now, you’re upset and on your feet, ready to march.

But we aren’t doing that. Some people have compared the way we release information through the documentary to Jaws.

I am so grateful to the School of Visual Arts for all their support.