Use our RSS Feed to keep up with the latest news and events from the SVA BFA Film & Animation program.
December 11
2016 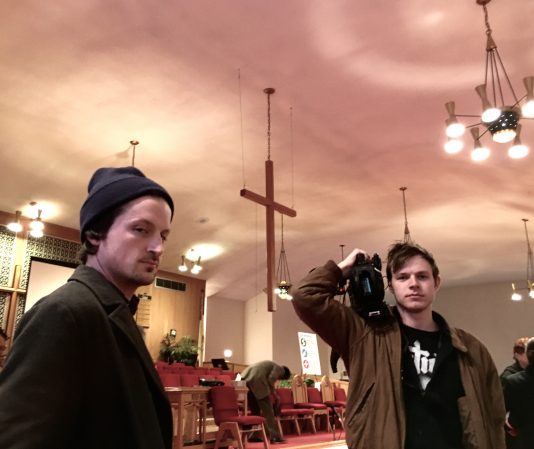 Will Hart, Day 2. Will gives the quick – and dirty – history of Flint’s troubles.

Flint is in Genesee County, Michigan – the birthplace of General Motors. It was once the richest county in the country, comparable to Silicon Valley now. There were 200,000 active Americans, working hard and breaking ground for civil rights. They led a famous sit-down strike and pushed for the 1968 fair housing act, allowing blacks to move into white neighborhoods. Like other rust belt cities, it was prosperous, educated and progressive in its day. The present generation of Flint residents still have that that in their blood, that strength to fight for their rights, for their jobs. They are current American revolutionaries, tirelessly fighting for justice, just like their parents. The “Rust Belt” is called that because its factories – now rusting – manufactured the steel used in automobiles. But then Flint’s biggest employer, GM, began moving factories to Mexico. This is the subject of Michael Moore’s documentary, Roger and Me. Moore was born in Flint and knew what he was talking about. Eventually as businesses left Flint and Michigan, austerity politics took over. You start slashing budgets, killing investment in communities with higher taxes. Schools closed, and property values plunged. Who wants to move their family to a place where the schools are dying? Fewer people, fewer jobs. There are even fewer opportunities in Flint today. Before the water crisis, it was known as the murder capital of the United States. 40% of the people are at or below the poverty line, 40% have felonies on their record. The population is now below 100,000 people, having lost even more in the past two years because of the water than because of the continuing economic depression. Until 2010, Rick Snyder wasn’t a politician, he was a businessman. He installed Public Act 436, which took over for an act rejected by the people of Michigan, though not the state legislature. Public Act 436 allows the governor – Snyder –to appoint an Emergency Manager in any community that he deems in financial distress. This Emergency Manager takes over the city council, and then supersedes the mayor. The local, elected local politicians are fired. It is a dictatorship, and this how a bunch of businessmen were able to usurp Flint’s water for profit.

Yet, 436 it is an extremely attractive bill because it can create instant budget surpluses. It has already been adapted and used in other states.