Use our RSS Feed to keep up with the latest news and events from the SVA BFA Film & Animation program.
October 23
2018 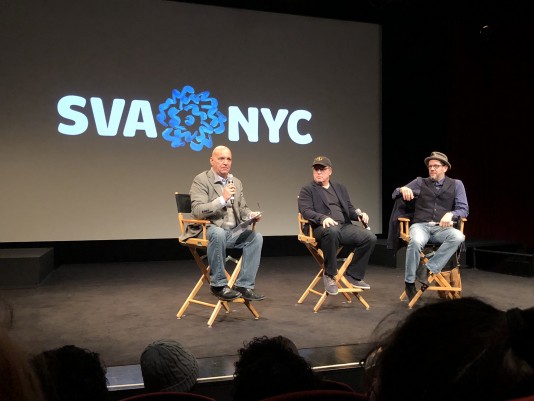 Last week (October 16, 2018) SVA students had the pleasure to attend a Q and A featuring Brad Bird and Michael Giacchino. Flip Sarta (BFA Film – Screenwriting 2020) shares some of the advice that he found most useful.

This was a crazy amazing experience that I wouldn’t have missed for the world. I was thrilled that these amazing professionals who took the time to come and share their knowledge with us. Students were lined up over an hour before the talk was even started. Talking with everyone beforehand was so exciting. I meet a new friend in line too!  All of us sharing the delight and admiration for the professionals we were about to listen to. Nothing is more fun than getting a bunch of movie nerds in the same place talking about how much they love the craft. I wanted to share some of the advice that both Brad and Michael gave to us:

– Studying films is valuable but don’t only study films you like – study films that you don’t like. Figure out why you don’t like the film and, most importantly, figure out how you would fix it. Fixing problems with films is literally the entire point of the film business. If you can fix a bad film you will go very far. Also, dissect films you love. Figure out what scenes really hit home and why the effect you the way they do – and pay attention to the scenes that don’t work as well.

– Fear is a great motivator. Brad started working on Ratatouille very late into production when all of the money and cool pre-production trips had already happened.  It was either cancel the project or start animating on it. Brad committed to the original deadline and then had a jam-packed mini learning session, a 3 day trip to Paris and then had to revise a failing feature script. There was no time to second guess, time was up. It was like running from a freight train that was trying to mow him over. Each problem had its own epiphany and you just have to race against the clock to create the best thing possible. Some problems were small and other problems were quite big. He found two people who worked at Pixar who also went to culinary school, took them out for drinks and learned as much as he could about the craft. Google was also a good friend for research looking up weirdly specific things – like the spice Lachha  Safron. Learn as much as you can from everyone you can. The line forming hours before the Q&A

-An example of the tiny problem that needed to be fixed was the character of Emile. Pete Stone voiced of Emile on the original temp reel. When Brad took over the project Pixar told him he could change any of the voice actors he wanted. Emile was originally an excitable character – which was cut. They then asked Brad if he was going to cut Pete from the role too. Brad replied: “No, he’s a great voice – his character is just wrong.” Emile was hyper and Remy was low energy and a downer – but it should be the opposite! Emile likes to eat garbage so he’s the one that is content and complacent while Remy is the one that is like “No! You can’t eat cardboard!”. By changing the dynamic of the two characters it fixed a lot of problem in the script. Before Pete recorded Emile’s lines, Brad gave him 2 beers – and then had Pete do the lines. From then on Brad would tell Pete to pretend he drank two beers before he recorded and gave him the lazy delivery. It was a huge contrast to how Patten Oswald gave his all over the place, explosive fireworks delivery. This small change had a huge effect on the movie.

– You need to stand up for what you need to make a good movie or else everyone is going to pull and tweak your script until it’s not the film you wanted to make. Put creative clauses in your contract, protect yourself. Don’t let them know you need them / need the job. You must be prepared to lose, but if the script is worth it – fight for it. – Brad described being a director as being a captain of a ship. The director gets the green light, so the studio gives you your boat and that’s your film. You have all the supplies and your first mate and your crew and you’re going to find this golden land where this film is perfectly realized and financially lucrative. You set sail with your supplies and maps and wave goodbye – and then you lose sight of land. You seem to be on course and everything is checking out – but there is a storm. Now you’re not sure of your bearings and the sky is covered with cloud cover so you can’t see the start. So now you think you’re going in the right direction and it seems like its correct but now the crew is getting cranky. “You’re not quite sure its the right direction captain? Well, what if we’re are headed in exactly the wrong direction?”. So you, the captain, must stay calm and lead as best you can. If you keep the crew happy and passionate the film will.

– As the director, you try to stay open to what your crews’ input but you also have to stay true to what made you passionate about the project in the first place and not lose sight of that. Some of the techniques are if you discover a central idea – which you usually discover later in the story. Ratatouille, for example, the central idea was “Cooks are givers. Rats are takers”. It is a super simple idea but Brad put it over his computer while he was writing. So every time he would try to write a scene he would reference that because that is what separates the two groups, and that’s the competing goal of the two groups. Rats see the food as survival and the cooks see it as expression. All of those other thoughts radiate out from that one core idea. – Don’t write for what you think the market wants. Everyone and their sister are writing scripts for “the market”. You need to write from the heart – write the movie that you would want to see on the screen. The movies are a beautiful safe space and can open minds to ideas and worlds like no other medium can. Write from the heart to touch hearts.

These were only a few of the many gems of knowledge that were shared with us. I am so grateful to be attending a school that gives students opportunities like this.  Not many people get to meet name like this – especially so young! I know for a fact the things I learned during this talk will serve me well as I move forward in my scripts this semester.