Use our RSS Feed to keep up with the latest news and events from the SVA BFA Film & Animation program.
July 12
2018 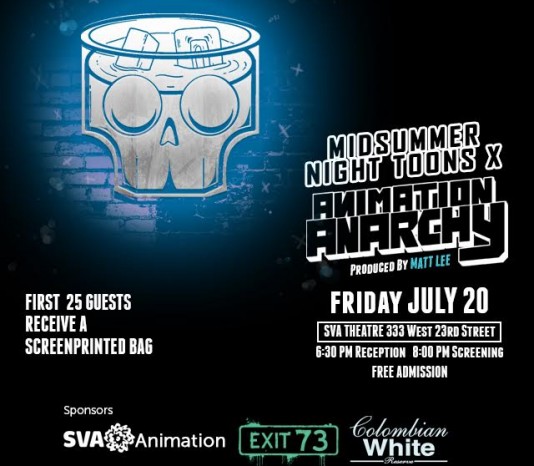 Matt Lee (BFA Animation 2005) is running the 10th year of Midsummer Night Toons, a free screening event that showcases new films from animators and filmmakers. You can register for free by clicking here.

I am an SVA Animation alumnus and I have worked for advertising agencies, shows for Adult Swim at Titmouse and Penguin Books/Random House. I have produced and curated the Midsummer Night Toons screening series for the past ten years (year ten is titled “Animation Anarchy”). Midsummer Night Toons began as a way to get friends, fellow alumni and colleagues to work towards a deadline to premiere new short films – because after graduating from college it is tough to make a short film after work hours. There’s no call for submissions, no submission fee, and I attend student animation screenings to choose additional shorts that fit well with the program. The program itself runs 30-45 minutes and the bookends of the event are more of a social gathering. Animators from all over NYC can network and meet filmmakers in a non-competitive environment (no awards are given out at the screening). My main goal is to have the filmmaker’s work be seen and go beyond the festival circuit. Four years into the event, Gary “Doodles” DiRafaelle short film “Breadwinners” was bought by Nickelodeon and it became a two-season show. Chris Burns and Robert Fox have been making short films for the past five years and two of their films – Coin and Boltron became a pilot and web-series, respectively. Exit 73 Studios (SVA Animation alumni Robert Fox and Chris Burns) is returning to sponsor the screening this year along with a donation from sponsor Colombian White (owned by SVA Animation alumnus Michael Oviedo).