Use our RSS Feed to keep up with the latest news and events from the SVA BFA Film & Animation program.
July 3
2014 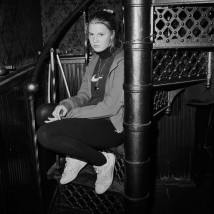 Our Student Blog for this week comes from across the Atlantic, in Stockholm, Sweden.  Building Bridges student Amalie Westerlin gives us a detailed look into her personal editing process.

I see the editing process like modeling. I get a lump of clay and I get an image of what I should be modeling by the director but the outcome of the model can be very different depending on the hands modeling it. I like films with tempo and rough editing style. When it is justified in the story I like it when I am allowed to make the editing visible. I try to edit maximum 8 hours a day, since my body is not made for sitting in front of the computer for a longer time.

What is most important for me is to allow myself to edit with emotions and a desire to edit. Everybody knows the importance of flow in a creative process and I try everything I can to get into that. If I am not editing out of desire the editing becomes bad. And I am very careful not to get tired of the material. I want to test how to edit scenes in different ways but I also often demand from the director that we know what we are investigating when we re-edit. I like it when directors leave me with material that can lead to different directions, and I like to have an explorative mind-set while we edit. Therefore, the editing process I am describing is very much directed towards these types of directors and materials.

When I edit a film I have to make a sketch before I can edit anything. I almost always edit the first cut too quickly because I get very eager in the beginning. I try to be good and I try to impress the people I work with, but this wanting to be good is my worst enemy. When I edit too quickly I might lose the director on the way, and we need to be on the same track while we edit. If I were modeling clay, I would need to make the contours of the figure before the details. If I start making the details with sound, music and nice cuts, there is a good chance they will not fit into the whole figure. The figure becomes some kind of scary monster with very beautiful toenails but no head. That is why I try to edit as slow as possible in the beginning. I do not cross cut the scene, but keep the chosen take on each character as long as it is. If I like lines from other takes I might save them as well in the first cut, and therefore every scene of the movie becomes very long and repetitive. The first cut is always the script version, not “the editor’s version.”  This version might be four times longer than the final film, and will be very boring. However, we are also able to see the storyline so for the next cut we can build on the emotional line. I can not see the emotional line before I have seen the storyline and therefore I will not be sure on were to make the cut since a cut is an emotional statement and I do not know the characters yet. After the “first cut” version a period of depression arises in me since the film is so long and boring. I begin fearing it will never be a film. The director will hopefully be even more depressed. I am satisfied if the director is unhappy after the first cut because if she or he is too happy it can be hard to take the film further.

If I edit too quickly and before I have really understood the director’s vision I might make the director forget his or hers own vision because the first cut with my vision is working so well. So after this first manuscript version the director and I talk about his or her vision and I try to be as quiet as possible, so I can understand what film we are making. When we go into the next cut of the film I start understanding the characters and the director’s vision, and I edit with sound and music. I now think and feel with the characters, since I have seen the story they are experiencing in the first cut. I am starting to get into the mood and the breath of the film. New energy and happiness overcome the depression period. When we edit ourselves through the film and through the many next versions of it, I suddenly find the characters in my dreams. This is where I find the editing very funny because the characters are not just characters anymore, they have become a part of me.

When we have a film that is almost complete, a new period of depression arises since the film feels kind of done, but not entirely. It is hard knowing what is wrong, and I might be a little bit tired. I probably need a break, and it will be the best to take two weeks vacation before we go back and make the final cut. If we do not take a break we might cut away ourselves in frustration that the film will not be done. But screenings are also a very good help to make the final cut of the film at this moment in the process. I am still in a learning process. Every time I work I get new good or bad experiences that I can bring into the next project. It is important for me not to let the last project color the next one, and I try to see every process as its own. I really love to edit because it allows me to live with different kind of characters for a while and it allows me to form, twist, and turn my own emotions on a non-vocabulary level. I can get the same feeling of flow when I write, but the reason I really like film editing is that I do not have to invent everything and that I have these different levels of storytelling: sound, image and character psychology.