Use our RSS Feed to keep up with the latest news and events from the SVA BFA Film & Animation program.
March 8
2018 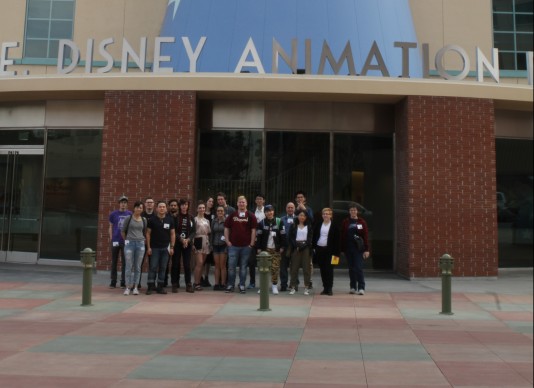 Sal Petrosino understands the importance of Los Angeles to the film and animation industries, which is why he takes a group of students out to LA every year to let them interact personally with leading SVA alum. The goal is to demystify the industry, and put a face on their futures.

The 2018 SVA in LA Program took sixteen students to Los Angeles where they met with top film and animation artists.  The goal of the program is two-fold, one to meet top visual artists in the film and animation industry and have them share their creative and technical approaches to visual storytelling. The second goal is to have each artist share their own personal journey on how they achieved their success which helps to demystify the students journey and let’s them know what they aspire, can be a reality. The week started off with a visit to the American Cinematographer’s Clubhouse where students met and mingled with cinematographers; George Spiro Dibie,, Chuck Minsky, Donald A Morgan, James L Carter, Lisa Wiegand, and David Perkal.  Each artist shared their creative process toward creating a visual palette to a script and answered questions from the students. Later that day, director Ti West, SVA Alumnus 2004, met with the students and discussed his directorial approach upon starting a film.  He discussed his collaborations, his interaction with the actors, and his struggles to get a film off the ground. Wednesday was “Disney Day” as we visited Disney Animation Studios and Disney TV.  We first stopped at Disney Animation Studios where we were presented with a video presentation of how the Disney Production Pipeline works. We then met with two SVA Alumni, Jesse Averna and Nicholas Manfredi. Each alumni spoke about their journey from SVA to Disney and afterwards the students shared a lunch with our alumni and used the opportunity to network. After our visit with Disney Animation Studios, we took a short ride to Disney TV where we were guided throughout the work environment and met with SVA alumna, Dana Terrace who has been green lighted to begin her new pilot “The Owl House”. Dana shared how she pitched the series to Disney and how the show is put together. The following day we visited one of the top special effects companies, the multi-award winning Framestore. There we met with Susan Vanderhyden and Special Effects Director Mike Bain who presented a reel of the special effects work the studio creates. Later in the day, we visited with SVA Alumni, (1992), producer Randall Emmett, (The Silence, The Irishman, and Lone Survivor). Randall spoke about his days at SVA and how he was able to produce a feature film as a student.  He discussed his collaboration with Martin Scorsese and guided the students on what they should do once they graduate.  While visiting Randall, he personally called his LA contacts and provided four students with summer work opportunities on upcoming feature films. We capped off the day with a meeting with Academy Award winning sound designer, Mark Ulano and his wife Patrushkha who is one of the most coveted boom operators in the industry. Mark shared his creative and technical approach to a film starting with reading the script several times, and shared stories about his long time collaboration with Quentin Tarantino. On Friday, we visited Cartoon Network where we were greeted with a rooftop panel of animators including SVA Alumna; Rebecca Sugar, Mike Roth, and Kat Morris.  Rebecca reflected on her time at SVA and how she pitched Steve’s Universe.  Mike spoke about his travels from graduating SVA to working at CN. Our last guest of the 2018 LA program was legendary Disney animator, Floyd Norman, (The Jungle Book, Toy Story 2, Mulan, Monsters Inc.). Floyd spoke about his early days working with Disney and…with Walt Disney himself! He shared Walt’s vision of what the Disney style is and how they collaborated on the Jungle Book and other Disney films.

Overall our students shared the trip was a life experience for them and return home  inspired by their visit with the various artists.

Holy WOW, this is FANTASTIC! Absolutely so cool and I’m gonna rack up the funds to go this following spring break. Thank you for these fantastic opportunities!