Use our RSS Feed to keep up with the latest news and events from the SVA BFA Film & Animation program.
March 12
2015 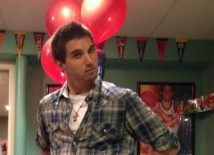 It’s still weird to think about.  I distract myself, getting involved in other things, and it’s like I forget it even happened. I’d go home and expect her to still be there, sitting on the floor looking up at me.  I have to nudge myself back into reality.  It’s weird.  She’s been a part of my life for the last 15 years.  Expecting her to be at home waiting for us, with that face of hers, as happy as a clam that we’re home – is not an easy habit to break.  The hard thing is, she was like that till the very end.  She was still active, playful, sweet, and wanting attention.  Consciously she was the same dog she had always been, but her body had just given up on her.  Makes me think, even though she was here 15 years, she should have had more time.  Because she was so aware, her mind was so young still.

The worst thing I’ve ever done is making her go to sleep forever when she was still so full of life.  I hate thinking about this, I really do.  I knew it was time, we all knew it was time, but seeing her vibrant, curious face suddenly turn still and lifeless was too much.   I had been strong up until that point. I hadn’t cried or anything like that, even though my mom was crying and my sister was crying.  I was strong up until that moment, but I just couldn’t handle it, and I fell apart.

Our first dog died when I was only 10 years old, so I didn’t go with them to put her down. Now here I am, 20 years old watching it happen, crying like a baby. I called my dad afterwards, and we talked about it.  He wasn’t with us this time, but he was there to put down our first dog. He must have been 40 years old at the time.  He said he hoped to never have to do that again.  It was rough.  I felt like we had taken something away from Miss Rose that wasn’t ours to take. And I know we had to, or she would have been miserable. But those are just things you tell yourself.  It doesn’t matter if they’re true, and it doesn’t make it any easier to deal with.  We did the right thing, she’s in a better place, yadda, yadda, but she’s still not here.  She never will be.

There’s nothing we could do to make it okay, no death is good enough for her.  She was loving, sweet, and absolutely perfect.  And I’m trying to relive those last moments in my head over and over again, because I don’t want to let go. Every second, every minute, every hour, every day from here on out I have to get through without her.  And as time goes on and memories begin to fade, she and I can’t replace them with new ones anymore.  I don’t want to start to forget about her, I don’t want to lose those memories and those details.  I don’t want to forget playing fetch with her on the soccer field, or when she was a wild puppy and I was a 5 year old kid, and how she scared the shit out of me because she was crazy and jumping around.  Or how much she loved the snow.  So I’m constantly trying to keep them fresh in my mind, because they’re all I have left of her now. Before we put her down at the vet hospital, my brother went outside for a second, and he brought back a snowball.  Because she loved to chew on snow, and she ate it right up.  She was just the same as she always was, but it didn’t matter, we still had to do it.  It just came to this point where the best thing we could do for Miss Rose was let her go.