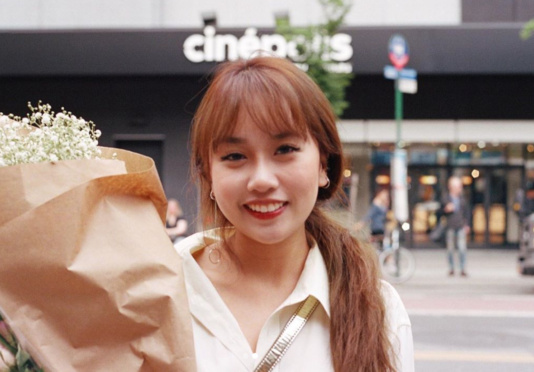 2019 Alumnus Bouquet Napussorn writes about making her thesis film, submitting to festivals, having festival screenings canceled, and staying optimistic through it all. Watch the trailer for her film here!

Prior to Covid-19 taking over the world, I believed I had the beginning of my career figured out. I was planning to attend multiple film festivals and screenings of my thesis film, Tortun, and preparing to work on a number of freelance shoots. But when I started getting emails notifying me that the festival screenings were cancelled, I couldn’t feel anything except disappointment. Naturally, the first instinct that I had was to collapse into self-doubt and mild melancholy. However, it is not just me who is suffering, and I have to stay strong for the sake of my own sanity. At this moment, despite the news and despite being heartbroken from a lot of Spring 2020 projects being cancelled, I am determined to follow my dreams.

Growing up I never felt like I was truly understood by the people around me or the society I grew up in. Don’t get me wrong, I was raised by a loving and supportive family, and I was always provided with the necessities and materials to follow my dreams, but I was placed into an international community from a very young age. I would find myself being pulled back and forth between the traditional expectations and western ideas. I was never too proper or feminine, and something about me has always made people feel uneasy. It might be because of the way I expressed myself, the way I dressed, or the way I wanted the world to be. I was wild and reckless, but luckily, I survived through it all because of my social butterfly charms and my art. However, even among the like-minded social groups, I still felt like a misfit. I’d catch my mind wandering off somewhere else, sometimes as far as New York City — and sometimes even further beyond this world.

I never really understood the true artistic purpose of what I was doing. I would just trust my instincts and the authenticity of it and allow myself to express the overwhelming feelings inside of me into all of my work. It wasn’t until a professor I had in my third-year production class pointed it out. He said, “Bouquet, I haven’t seen anything like this in my 30 years of teaching.” He then proceeded to use a word to describe my work that would solely change the game of my forthcoming filmmaking path, “Existentialism.” After that melodramatic life-changing experience, I made sure to take classes, study films, arts, and read literature that would help me truly understand what Existentialism is. Hence, my thesis film, Tortun: A Poetry of A Girl Who Fell to Earth, was delivered to the world.

My thesis film is a poem dedicated to isolation in the absolute core of the big metropolis. Although shot in Thailand with Thai characters, there is still a distinctive feeling that sets it apart from the country and the culture. The absurdity in Tortun’s character, thoughts, and everything around her are my surreal take on what it is like to feel isolated all the time in this modern life. However, it is not just a personal experience to me, but a collective loneliness we experience as a generation. We are currently facing these confusing and strange times. The world changes faster and faster, and it only seems like we are more mentally disconnected to each other in the process of trying to keep up.

Tortun won six film festival awards from Italy, New York City, and Los Angeles. It was also officially selected to be screened at Anthology Archives, the Museum of Moving Image for the First Look Film Festival 2020, received recognition in Southeast Asia, and a possible pitching project from a Hong Kong film festival. I am very aware of the strengths and weaknesses I have and I know when to be grateful, especially to the outstanding team that helped me create this cinematic world. As I am currently working on other projects, I could only hope that Tortun will continue finding her “home” and “where she belongs”, especially in the hearts of the audience she had the privilege of screening for.

Since May 2019, I was training under a film and media production company in Thailand, working as the assistant director and crew runner. Right now, I am working as a freelance director for commercials, music videos, and documentaries. My plan is to travel for work between New York City and Bangkok, and also among other cities in Asia. After this pandemic is over, I hope to resume to other projects that are on pause. It is an unfortunate and difficult time for everyone at the moment. And as a creative in quarantine, there is of course a lot of room for anxiety, uncertainty, and fear. However, there is true no easy way out, and we just have to keep on going, even if it’s just from our bed to the fridge for now.