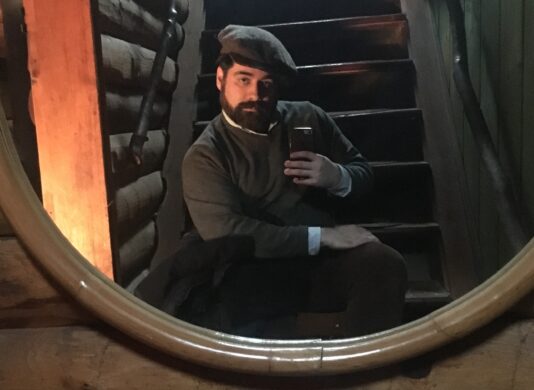 MAKE COOL SH!T is a comedy docu-series which follows College Humor icon Josh Ruben, Emmy Winner Chris Redd (SNL), Critics Choice Winner Aya Cash (The Boys), and Becky Drysdale (Key & Peele), as they make the Certified Fresh horror/comedy feature film Scare Me. From script to its premiere at Sundance, this non-fiction podcast is a true story of hope and process, capturing all the grit and nuance of filmmaking in the modern age. Listen and subscribe: Apple Podcasts | Spotify 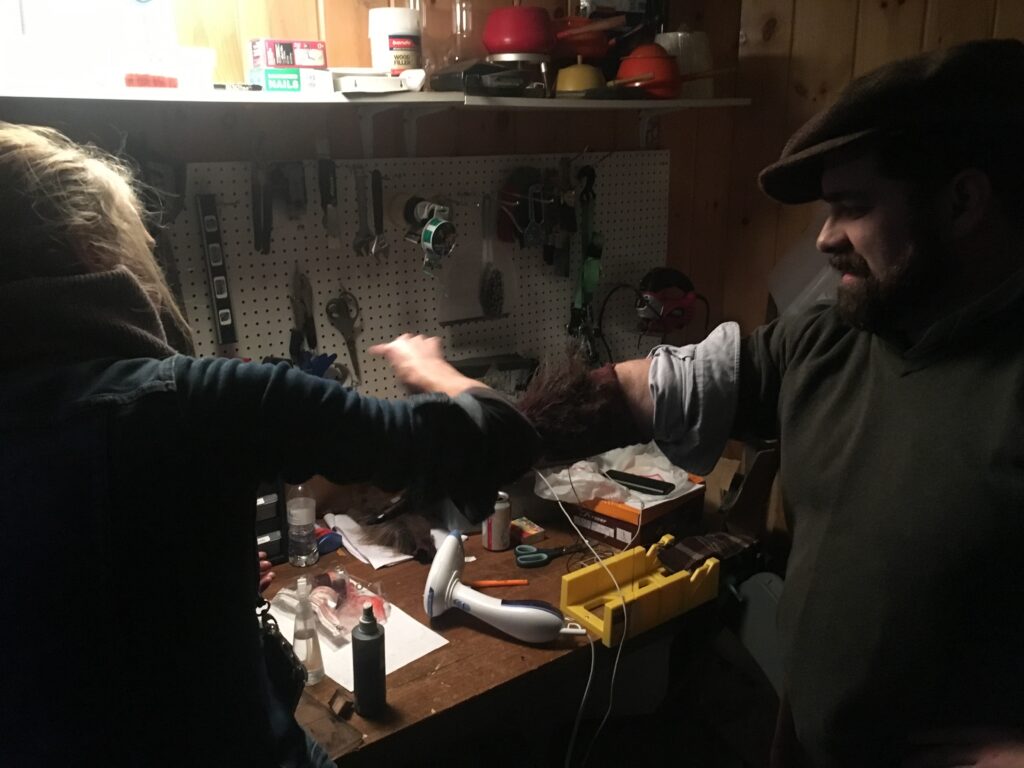 I met writer/director Josh Ruben and cinematographer/associate producer Brendan Banks while at College Humor in New York. We worked on several projects together and I produced two short films for them, Cabin and TK-630. When Josh first told me about Scare Me I was on board even before reading the script. I didn’t care what it was — the chance to work with them again was all I needed. Josh wrote the script and would be starring in it as well as directing. I wasn’t going to miss that.

I knew it was going to be low-budget — but this was very low budget. For Scare Me, I was the costume designer and the entire costume department — no wardrobe supervisor, no on set costumer, no PAs — just me. And it had, to this day, the shortest shooting schedule of any feature I’ve ever worked on. It was a big challenge. 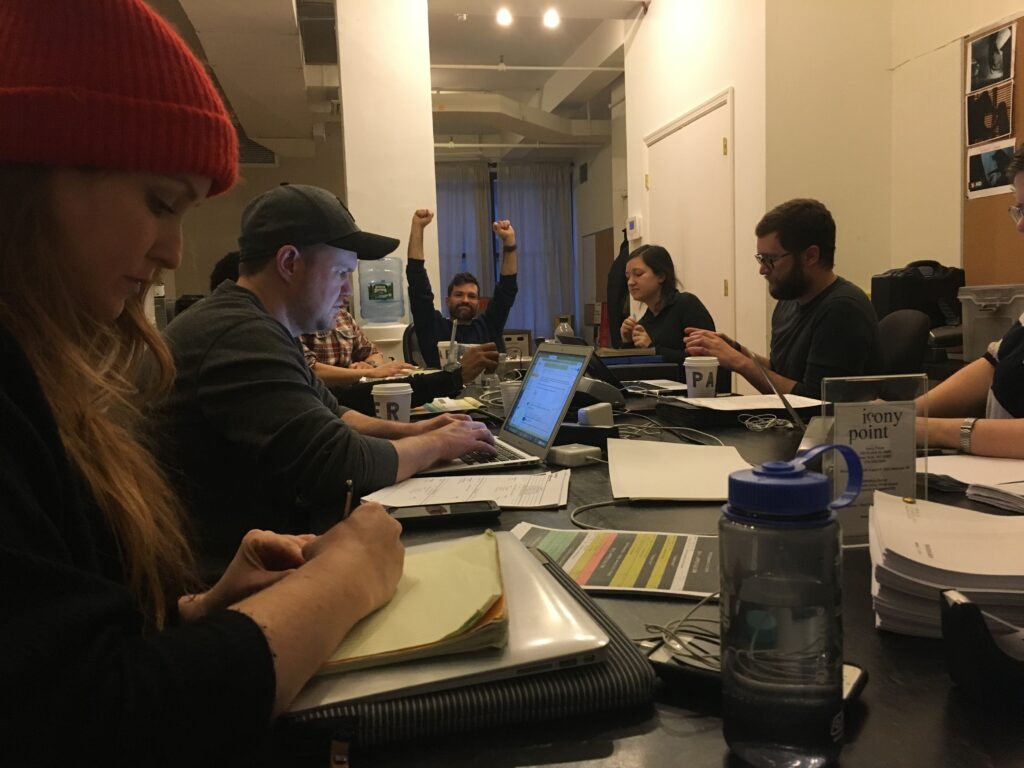 To compound everything, it snowed right before shooting began in Woodstock, New York. And it got cold — so cold that the pipes froze on both the location and the crew house more than once. Cold weather has a tendency to just slow everything down and make even simple tasks much more difficult. It snowed several more times and the location was at the bottom of a long driveway that only four wheel drive vehicles could access. We all had to be ferried in and were sometimes trapped when the vehicles were all out on runs. That just ate up time and energy. 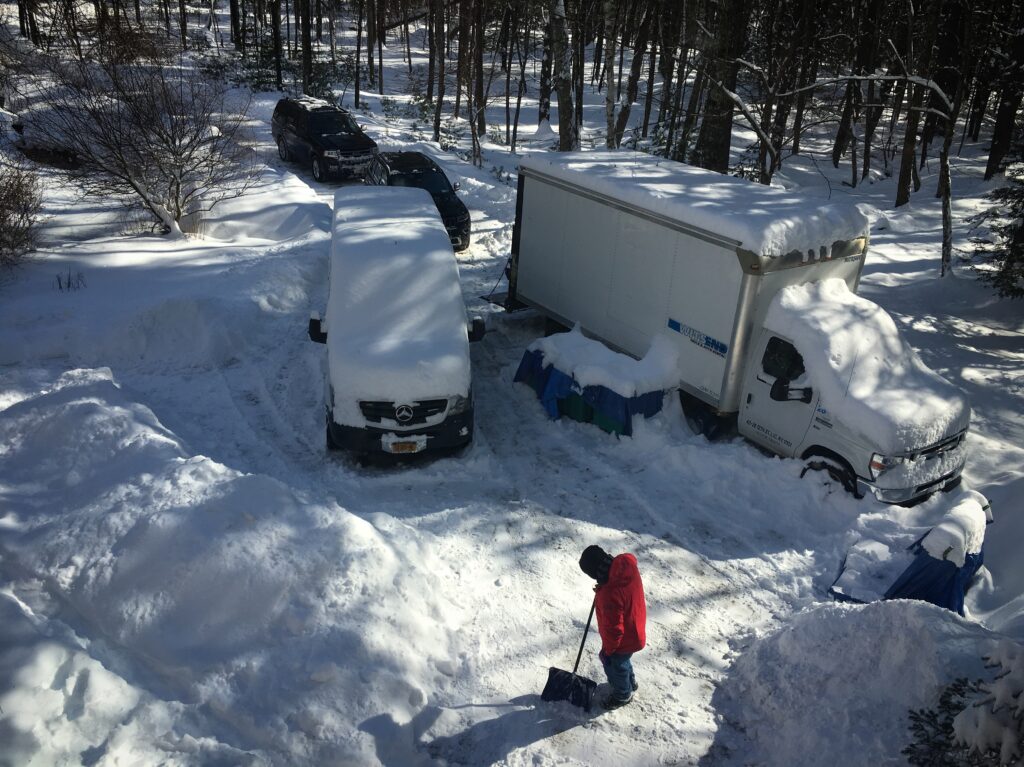 Originally, Aya Cash (You’re the Worst, The Boys) was scheduled to come in for a costume fitting a few days before she started filming, giving me time to make alterations or purchase new options if needed. Instead, on the day she arrived I was informed that we would be filming with her that very day—directly after the fitting in fact. Great! My razor-thin margins of error were now eliminated completely. Her character’s first outfit, a track suit ensemble, went together nicely with a look that Aya and I both really liked. But we were having some fit issues with the options for her character’s main look. I was beginning to panic when Aya pulled out a personal sweater she had brought along with her — a black sweater with white hands all over it. It was absolutely perfect. More perfect than my initial design. And … you can’t beat perfect. I breathed a sigh of relief, we used her sweater, and it looked great. 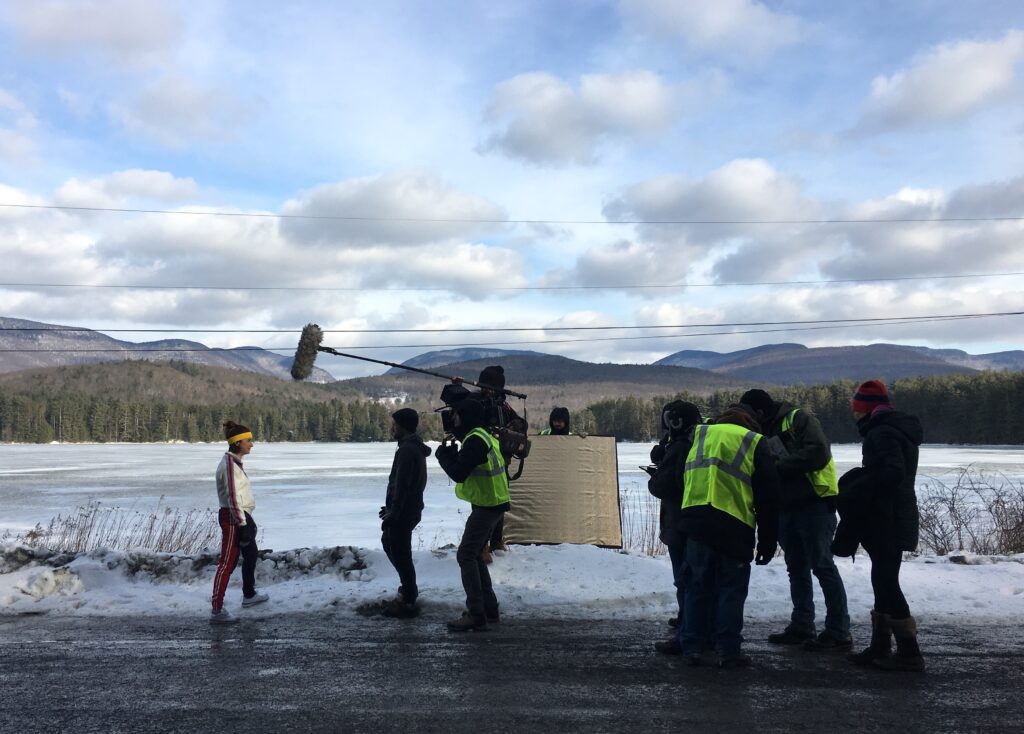 One of my designs that came out exactly as I intended was for Chris Redd playing Carlo, a pizza delivery worker. Originally, we were going to see if we could use the name of the local pizza place in town — Catskill Mountain Pizza. When that didn’t work, I just used the name of the local mountain in town — Overlook Mountain. A mountain that in real life has the burnt-out ruins of a grand old hotel. As we were shooting a horror movie I couldn’t resist adding a Shining reference to it — I gave it a 237 street address and added the tagline “Tell ‘em Jack sent you.” Josh loved the idea. 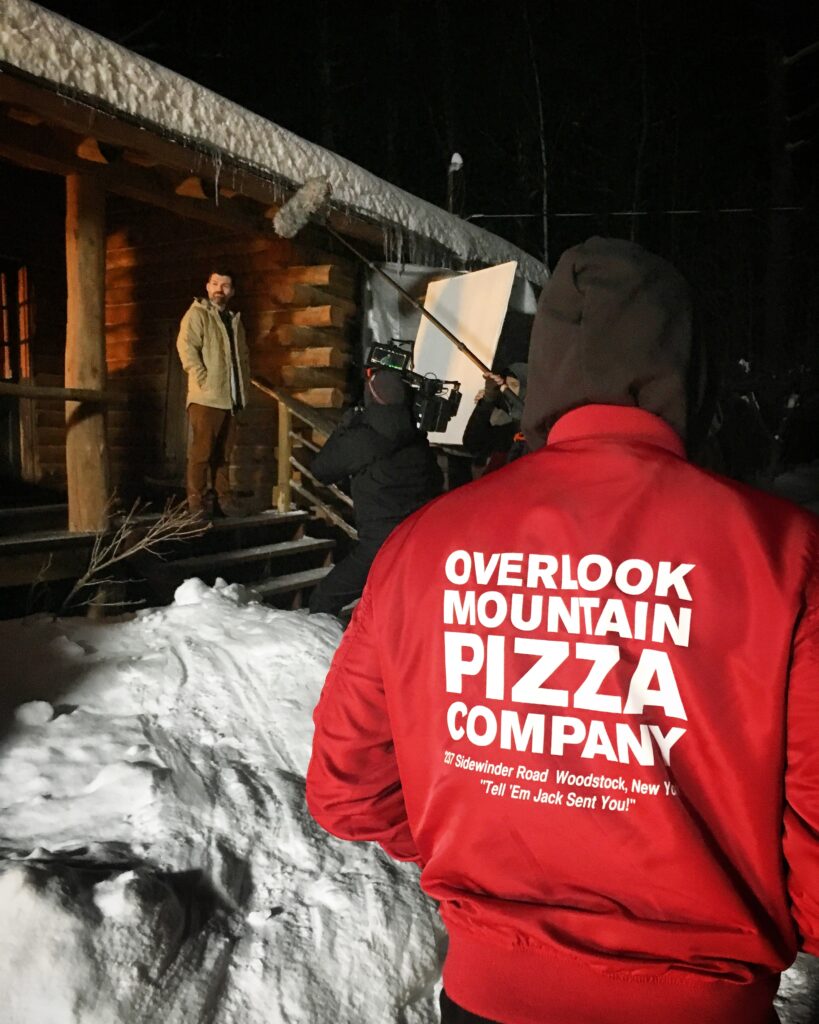 Nod to The Shining with the Pizza delivery jacket worn by Chris Redd.

The final curveball was when I came down with a nasty cold. It was the weekend, I was in the crew house alone, and started having trouble breathing. Thinking it might be pneumonia, I called two of the only people left up there — Josh and Brendan. Brendan arrived first and drove me to the hospital in Kingston. After a few tests, I was relieved to learn it was only the flu. But I was terrified that others in the crew might have it or might get it, which would be disastrous. And, as I was the entire costume department, there was no one to fill in for me on set and take over. I left instructions as best I could and quarantined myself to a section of the crew house until I was no longer contagious. Then, I willed myself back to work. In a precursor of what was to come a year later, the crew wore masks for the rest of the shoot. Thankfully, no one else caught it and we finished filming without any more incidents.

It was a great opportunity and despite the hardships, something I would not hesitate to do again with the same team. Sometimes the limited resources can focus you, inspire creative problem solving, and produce something more earnest and honest than more time and money ever could.

I highly recommend the MAKE COOL SH!T podcast to find out more about the making of Scare Me. And you can check my website, seandermond.com, for a sneak peak at Mrs. Benedict Arnold, a feature that I wrote, starring Josh and being shot by Brendan. It’s a dark comedy about the treason of Benedict Arnold from the point of view of his wife—an co-conspirator. I will direct, and of course, costume design it.

SEAN DERMOND (BFA Film & Video 2008) is a writer, director, and costume designer who has worked on over fifteen feature films, numerous commercials and shorts, and a miniseries. Twitter: @seandermond | Instagram: @tugboat82 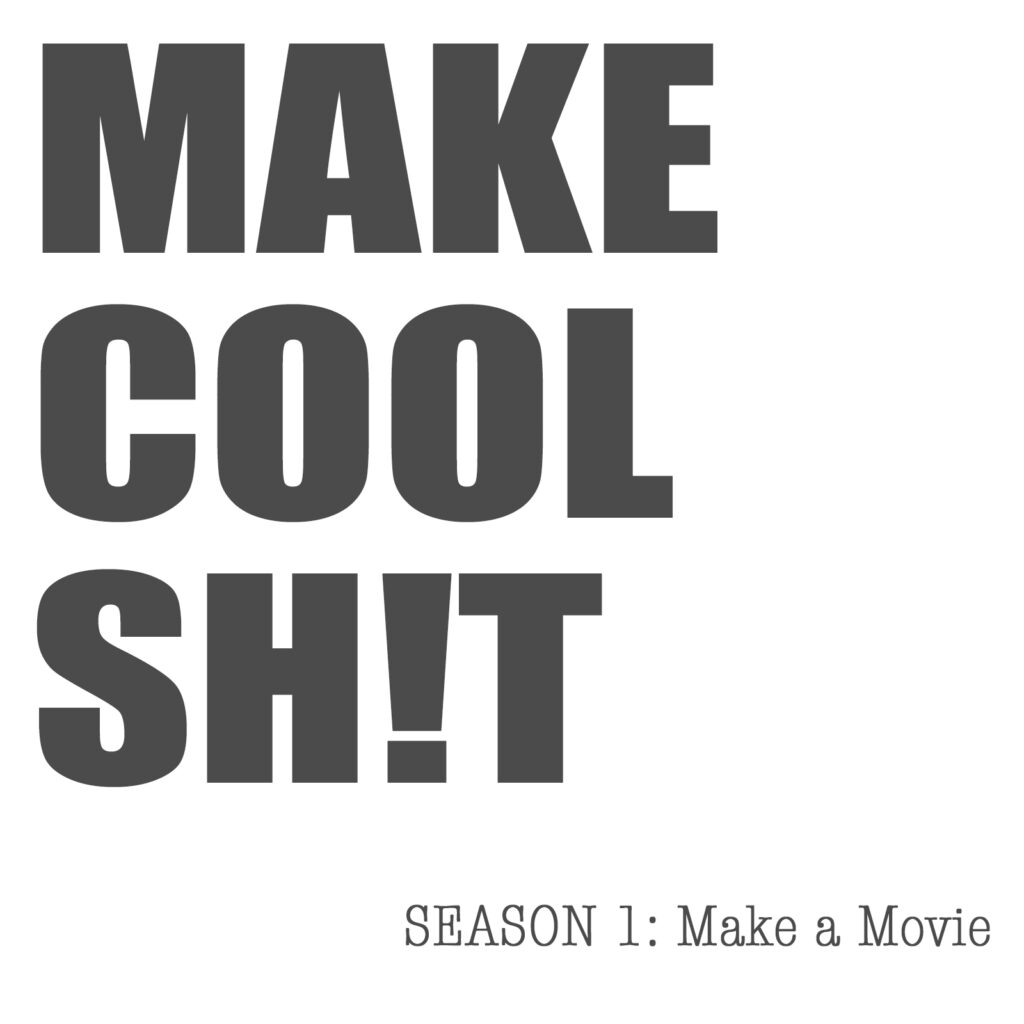