Use our RSS Feed to keep up with the latest news and events from the SVA BFA Film & Animation program.
August 31
2019 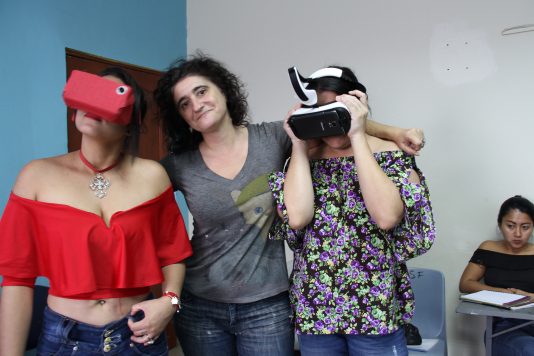 I am a filmmaker with over 20 years of experience making documentaries, traveling around the world and looking for interesting stories. 3 years ago for my birthday, a friend bought over a Samsung VR viewer and I was hooked from the first frame,  possibly, one of the most  exciting moments in my career! Here is a traditional filmmaker using the newest technologies, 360 V.R. A.R. once you have  experienced it, there Is no way back, and for me, no more “flat” films as 360 filmmakers jokingly say

When it comes to “immersive languages” one of the first things that comes to most people’s mind is gaming. I am not interested In  killing zombies, or shooting nazis, or being scared to death. I am interested in using this technology to bring the documentary/journalist world into a new moment, experimenting with new ways to get the audience closer to the story.

Fast forward 2 years, and I’ve met some other folks like me. We organize a group of VR renegades., we call ourselves Virtual Reality Punks. We’ve made a few 360 projects together, such as a film about cockfighting in Nicaragua, a portrait of a NYC’s downtown character, and a street sexual harassment campaign, among others.

Now we are concentrating our efforts with a project called Window to Freedom.

This project came about in December 2018, while I was teaching a 360 video workshop to a group of incarcerated women in Ecuador. After the initial reactions to what we showed them, wore off (360 video of Niagara falls, a tiger sanctuary, and other exotic locations) the women in Ecuador presented us with a very good question…

Why don’t we bring them the experience of an upcoming daughter’s wedding, or transport them to the town’s square where they usually hang out, or simply, a quiet moment on a Sunday  afternoon with the kids at home.

They asked us to bring a piece, a “window”  of what they left behind.

From this, Window to Freedom VR was born!
Here is a link to this project:www.windowtofreedomvr.com

As filmmakers, we are always trying to figure out ways to tell stories that are important to us and engaging to the audience, for me Virtual Reality,  has arrived  to do that, to bring us to the next level of visual  story telling. Hacking the brain, and jumping right into it.

Links to other 360 VR projects:www.virtualrealitypunk.com