Use our RSS Feed to keep up with the latest news and events from the SVA BFA Film & Animation program.
October 21
2019 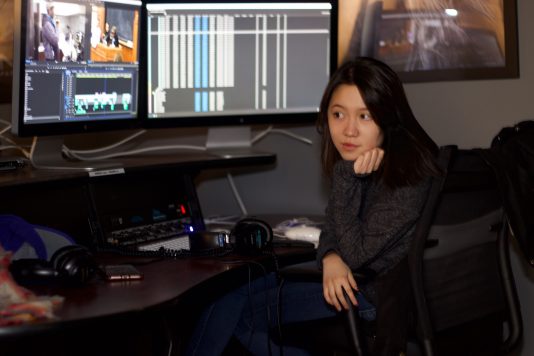 Third year editing student Charlotte Atkinson writes about why she applied to film school and discusses her new job at CBS Sports!

It’s hard to say when I first realized I wanted to work in the film industry because I’ve always been interested in the visual arts ever since I was young. I used to write and illustrate images along with stories I created. I started noticing the mix of artistic and technical aspect of films, such as editing and cinematography, when I saw the movie Tron Legacy. I was a huge fan of the first film too, but I definitely didn’t pay attention to it as much as I did the second one because I felt it was more geared towards my generation, in regards to the pacing and the advancements of CGI.

When I first enrolled in SVA I was pretty nervous, but also very excited because my high school didn’t have a large videography department and didn’t put much of its budget into the arts. I wanted to be with other talented, creative classmates and work on projects that I was passionate about. The projects I did in high school were pretty amateur since my classmates were there to get out of a different class, or to fulfill credits. I’ve known I wanted to be an editor since high school, so during my first year at SVA I really focused on honing my editing skills.

I wanted to work in post rather than production or pre-production. I feel like all filmmakers can relate to wanting to get your feet off the ground before or right after college. There’s a lot more pressure now compared to my first year.

Over the summer I got a job at CBS Sports Network. My boss actually found me through a platform like LinkedIn. He contacted me via email and then we started messaging back and forth. He asked me if I was interested in editing for the social media platforms. Then he called me in for an interview with him and his boss.

They asked me what my workflow is like and what I like to edit. They really cared about how passionate and diligent I was. If you force yourself to think about what you like doing and what tools to use without thinking of the content itself, then you’d be fine with any freelance work. If it’s a film and it’s someone baby you can’t ignore the content. If it’s corporate, like CBS Sports, force yourself to be interested in it. Go watch the shows and pick up the lingo. It will make things easier for you.

At CBS Sports I work every weekday. I take the night shift which starts around 4-5:00pm and goes anywhere from midnight to as late as 3:00 am. Out of the those five weekdays, three of those nights I work till 3:00 am. I have my own editing station, which I shared with two other freelance video editors. I watch long talk shows about sports, ranging from 4-5 hours. I cut and pull clips from them for YouTube, CBS social media, and other websites and social media platforms. Then I format the clips for those platforms.

I cut shows covering anything sports related, like NFL, NHL, NBA, MLB, College Football, etc. That can range from things like petty drama about what’s happening in the sports world, to what the outcome of a game was last night. It’s pretty fun. As someone who wasn’t initially into sports it’s been an interesting process picking up the lingo because it’s like a whole new world. Is it something I’ll want to continue doing after college? Probably not, but it’s a cool experience!

Working for CBS Sports has been my first taste of the corporate world. I think it’s cool to explore that side of the industry because I know there are a lot of different branches you can go into as an editor and filmmaker. Right now I’m also working on a few different independent projects. My best friend has a few documentaries that she’s directing, and I’ll be editing. I’ve also been planning to co-edit a thesis film this year but I’m going to try and keep it limited because last year I just said yes to everything and that was difficult.

I really enjoy working with students. I think it helps editors discover their preferences when working with different directors. I think every editor is different and every director is different, so sometimes people don’t mix and ideas don’t mix. You want someone who understands you and you want to understand them. The reason why I chose editing, as opposed to directing, cinematography, or screenwriting, is because when I was younger I used to think about how things were cut and the technicality of it.

It is so magical to me that you can film one thing, slice it, and make it completely different. Completely change the story, intention and the mood. You can add music. You can add effects and titles. You can do so much with editing. That’s really the beauty of it. You start off with something and you build on it. I enjoy implementing my creative ideas into other people’s stories. It’s kind of like nurturing a child. If you talk to any screenwriter or director, their film is genuinely like their child. You can’t just push them over and raise their child. It’s theirs! They gave birth to that child! It’s kind of like being the babysitter in a way. You teach the child life lessons. Valuable life lessons, but you don’t negate absolutely everything the director, or the parent says.