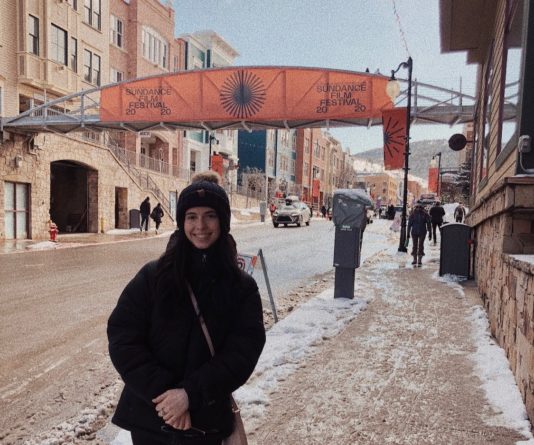 Thesis student Julia Ward writes about her 9/11 documentary, Panic Never Pays, the importance of planning ahead, and improvising when things don’t go as planned.

During the UN Women’s HeForShe Campaign back in 2014, co-host Emma Watson delivered a speech in which she famously stated,  “In my moments of doubt, I’ve told myself firmly – if not me, who? If not now, when?”. To this day her quote resonates with me. I find myself asking these same questions in my own moments of doubt. Before, and even during, the process of making my documentary there were many. And likely, there will be more to come even after I finish. Am I doing these stories justice? Were the choices I made tasteful? Is this the right time? Despite picture-lock, these are questions I still internally struggle to answer. Then I think back to Emma’s quote and ask myself: “If I don’t share these stories, who will? And if not now, when will they ever get told?”

On paper, my thesis documentary Panic Never Pays is about the immediate and after effects of September 11th on four individuals. To myself, the victims and their families- it is so much more. Close to 3,000 people died on September 11th but those numbers had names and faces. They were someone’s mother, daughter, uncle, partner, friend. To this day, the media speaks only of these individuals as numbers. I hope Panic Never Pays reminds audience members they were much more than that. They were just like you and me.

I have wanted to make this documentary for as long as I can remember. I was very young when the events of September 11th took place but it changed my DNA. I had questions. Lots of them. Many of which went unanswered or were met with censored explanations to shield me from the harsh reality of what took place. I remember understanding what had happened but never being able to process it. Now at the age of 21, I hoped that by speaking about what really happened with those who experienced it firsthand, I would get the sense of closure I had been longing for and felt like was missing.  I hope my film encourages others to share their stories, no matter how difficult.

I started pre-production my freshman year. I remember speaking with my now thesis advisors, Kamil Dobrowolski and Teah Strandjord, about this documentary the first week into classes. I asked them to be my advisors (unofficially) the following year. I put an immense amount of pressure on myself from the beginning because I had these four incredible untold stories and I wanted to do them justice in a professional and tasteful way. If that meant planning four years ahead, so be it. I am an Editing major who aspires to be an Assistant Editor. I had no previous directing experience, especially in documentary. There were many times I doubted my ability to do this. I never was a risk taker but this wasn’t about ME… this wasn’t MY story to tell. This was about the four individuals, their stories and all of those who never got the chance to tell theirs. Panic Never Pays became bigger than any fear or doubt I had.

Despite years of planning, things still went wrong. And that’s okay. Instead of panicking and stressing about the things I couldn’t control (like I normally do), I learned to accept and trouble-shoot instead. I wrapped shooting over the summer, picture locked by March, and was supposed to start sound mixing and color shortly thereafter. One thing the film industry taught me is that things don’t always go according to a set plan. No matter how hard you try to avoid it, things are bound to go “wrong”. But the show must go on…and it does. Around January, there was news of a new virus- COVID-19. Around this time, no one in the city really thought much of it. Everyone seemed to function with an “out of sight, out of mind” mentality, until the virus began to spread rapidly. By March, the cases in New York were multiplying overnight. One day I was at class, the next I was moving out of the city and having classes online. It felt like my entire world turned upside down only within a couple of hours. Now what? What’s next? What’s to come? A million thoughts, scenarios and fears instantly began running through my mind.

This is where the importance of planning ahead really came into play. With support and reassurance from my advisor, I knew despite the current situation I would still be on track to submit my thesis in April. Picture locking in the beginning of March allowed me enough time to deliver and plan with my sound mixer on how to continue the process from there. I also was fortunate because my mixer has a studio set up at his apartment which allowed for us to continue mixing despite no access to school labs. Thanks to platforms like “Zoom” I was able to continue thesis meetings with my advisor and sound mixing sessions with the screen sharing and video chatting features. The same was true for the process with my colorist. All that planning ahead that seemed over the top at the time, was now a key factor in me completing my project on time and with little to no worries. As someone who normally struggles with anxiety, living in such unprecedented times has only amplified that. However, having one less thing to worry and stress about has been huge for my mental and physical health. For the first time I was discovering what I was capable of despite the anxiety I had trying to convince me otherwise. This mentality wasn’t learned overnight, nor was it easy to maintain but thanks to the amazing support from friends, mentors and family I always had a reminder I could do this if I ever needed one. This film would not have been possible without that support system.

My advisors went above and beyond to make time for me. They have been there for me literally, and figuratively, since day one. They embody the type of professionals and people I aspire to be and I know I have created friendships with them that will last a lifetime. The crew, made up of friends I look up to and admire, made this vision of mine come to life… and in ways I never would have even dreamt of. I feel very fortunate not only for my friendship with each one of them but that they were willing to share their talent and collaborate to make this possible. This was just as much their film as it was mine and together we made something we all are proud of. To me, that’s worth more than any award, nomination or recognition I could ever possibly receive from this film. And of course, this film also would not have been possible without the four brave interviewees. They were authentic, raw, and vulnerable from beginning to end. I hope I make them proud and I hope in some way this experience was as healing for them as it was for me.

These stories have lived within each of the four individuals and myself for quite some time, yet it either felt too soon or too difficult to share. But then I thought back to Ms. Watson’s quote and asked myself again, “if not now, when?”. I don’t think there will ever be a time where it’s not difficult to remember and relive these stories. Stories are crucial to future generations learning from in hopes that history never repeats itself. “Stories have to be told or they die, and when they die, we can’t remember who we are or why we’re here”- Sue Monk Kidd.

This film will forever have a lasting impact on me and the way I move forward in life. It challenged, inspired and humbled me. I walk away knowing I am more than my fears/doubts and that risks are worth taking. I encourage anyone reading to join me in taking more… After all, everyone has a story to tell. What’s yours?